After graduating with a degree in elementary education from West Chester University in Pennsylvania, Shelby Miske began working as a teacher, but she had a side job as well — helping her boyfriend, Sean Lowery, with the ladies’ side of his screenprinting business. United Tees really took off after some of its American-themed apparel items started pulling in orders from Twitter (where the company had 50,000+ followers).

As the company began focusing on this niche, which evolved into “Southern or country-themed items,” Miske started receiving constant requests for monogramming. 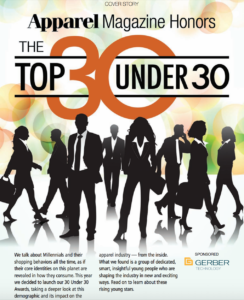 She was surprised by the interest — monogramming does not enjoy the popularity in other parts of the country that it does in theSouth — and eventually Miske decided to explore that avenue, purchasing a $600 home embroidery machine. Initially, her offerings were simple, such as a plain sweatshirt with the customer’s monogram, offered in two lettering styles.

Soon, the business was growing at such a pace that Miske found herself taking sick days from her teaching job to keep up with demand, and she realized the monogramming was big enough to be a business of its own. After three years of teaching, she left her job to focus exclusively on the new business, dubbed United Monogramming. Today, the business has seven employees, four big commercial embroidery machines, and most recently added digital printing to the mix. (It also offers monograms on a wide range of other products.) As it did for the screenprinting side of the business, social media has played a huge role in the company’s growth, with most of it now coming from Instagram and Facebook — it surpassed 100,000 “likes” on Facebook during the first week in October.

The company has been running a Facebook ad for three months to the tune of about $800 per day — which is generating $6,000 per day in orders — and Miske says the company is on pace to hit $1 million in sales by the end of the year. She is bullish on the business because she has found that people in the South — from where 95 percent of the company’s business originates — like to monogram everything. “Even as apparel trends change rapidly, I think monogramming will always be relevant,” she concludes.

At the End of last week we launched a brand new product that has gone VIRAL. In the first weekend it was available, this brand new product received over 10,000 facebook likes, over 13,000 instagram likes & over 2,000 comments. We sold 700 at full price and sales continuing to roll in. Here’s a look at the posts:

Since we’ve had direct to garment (DTG) printing, it’s been used for the United Tees side of the business. Our Monogramming products were all exclusively done with vinyl and embroidery like always. As an experiment, we started selling a big print monogram on the front of a shirts with different designs on the inside of the letters. This can only be done using our DTG printers, expensive pieces of equipment our monogramming competition doesn’t have access to. We are proud to have one of the best followings of monogram loving girls, but embroidered sweatshirts, hats, bags & jewelry are competitive products sold by all monogram companies. You can see why I am excited about the prospect of this new style of personalized apparel.

In the spirit of Fall, we came up with the idea to put a  monogram on a coffee cup inside of a cool design. This is where our ‘Coffee & Lipstick’ design was created. The product is unique and our customers (and competitors) have never seen anything like it. Just remember we were the first to market! United Monograms will always be in the business of personalized monogram products, a trend that has been around for decades. Now, with the viral success of our new ‘Coffee & Lipstick’ long sleeve tee over the weekend, we may have just started to uncover the future of Monogramming. Stay Tuned!